Day 1 of training camp got underway at the MTS IcePlex today with some on-ice drills, a scrimmage and then a meeting with the media.

Day 1 of training camp got underway at the MTS IcePlex today with some on-ice drills, a scrimmage and then a meeting with the media. 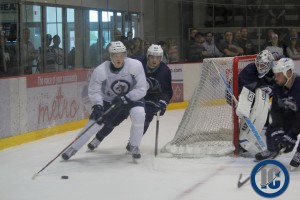 Andrew Ladd – How did Day 1 feel?  As captain of team what does he want to see from this team?  Any of the young guys catch your eye?  How important is it to get another line playing with consistency?  Did he notice anything about Scheifele?  Thoughts on the pressure he is feeling.  What makes a good camp?  How does he get himself back into the proper mindset?

Zach Bogosian – Having a healthy offseason.  What are his thoughts on Trouba?  What are the challenges of being a young guy?  Hainsey pulled a lot of minutes last season, can someone take those minutes?  Does he have someone he wants to play with?  What are his expectations for this team?  Keeping the core group, if they don’t make it, is that a failure?

Mark Scheifele – Does it feel different coming into this training camp?  Keeping his focus on making the team.  How is he better prepared?  Having games under his belt, does this increase his hunger to make the NHL?  Is it difficult not putting pressure on himself?  Can he see himself playing with Kane and Setoguchi.


Evander Kane – What was it like playing with Scheifele?  As one of the older guys on the team, does he help make the younger guys more comfortable?  What are the challenges for the young guys making the transition to the NHL?  How does he see himself and this team stepping up to the next level?  Anxious to finding chemistry on this team?

Dustin Byfuglien – Coming into camp into better shape than in years past.  Benefiting from a full training camp.  Trying to be more consistent.  Putting things in the past and getting ready to move on.  Expectations he has for himself.  What is it going to take to get this team to next level?  Being invited to Team USA Olympic camp.  What would it mean be to wear a Team USA jersey?  (“Would be nice to take the Gold from Canada”).  How many exhibitions games would you like to play?  (“I’d rather play all of them.  Who wants to sit and watch?”).  Being down weight from last season?  How much responsibility does he feel to set an example for younger defencemen?  How did he change his game this summer?  How important was it keeping the core together?