Another full day of interviews as more players returned to the IcePlex. Today saw captain Andrew Ladd and Chris Thorburn join the skate.

More players returned to the IcePlex: 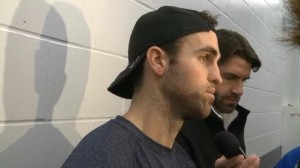 Andrew Ladd – Was the CBA worth it?  What does he like?  Potential to squeeze middle of the road (salary) players.  Winners & losers?  Looking ahead at schedule.  Can Jets benefit from short schedule?  Grind of travel in the East.  Why didn’t realignment get put into play?  How does Jokinen add to chemistry?  Jets special team modifications.  Concerned about key players (Pavelec, Kane and Byfuglien) on this team.  Expectation that rest of team will be showing up soon.  Asked about Byfuglien’s conditioning.


Chris Thorburn –  What has the process been like for him?  Did he think it would take this long?  What he did for past few months.  Skated with his old Jr. team in Michigan.  What his thoughts are on the schedule.  Dealing with a small camp and no exhibition games.  Is he in better shape than had schedule began in September?  Excited for the Jets chances?  What is he expecting from the fans?  Will Jokinen have an influence on the room?  Thoughts on his line.  Keeping busy during lockout.  Saying goodbye to Atlanta.  Ups and downs of the CBA negotiations.  Advantage guys who played in the AHL and European might have.