Jets assign the rookie to the Moose of the AHL.

Back in 2015 Jets fans watched the Boston Bruins make three straight selections and then waited for the Islanders to make a pick before Winnipeg had the opportunity to draft Kyle Connor 17th overall.  As has been well documented on this site he went on to have a phenomenal season at the University of Michigan finishing with 71 points in 38 games which included a 27 game point streak.  Turned out to be a one and done year for the Michigan born Connor with the Wolverines and he signed his first professional contract with the Jets, which was announced back on April 11th, 2016.

He came to Winnipeg this summer for the Jets rookie camp and then for training camp.  He had a solid pre-season with the team which included the game-winning goal in the second pre-season contest for the Jets (his first) against the Wild.  He played five of the seven games and was named to the opening day roster by head coach Paul Maurice. 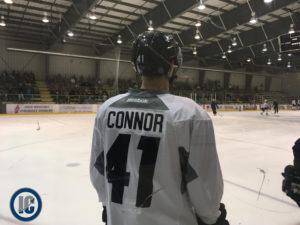 He began his first national hockey league game playing on a line with fellow rookie Patrik Laine and the two were centred by veteran Mathieu Perreault.  His first NHL point came in this game when he did some hard work along the boards on the power play, got the puck back to the point to Tobias Enstrom who then passed it over to Patrik Laine for his first career NHL goal. 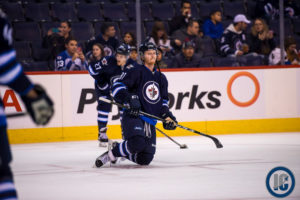 Skip ahead five games to a contest against the Dallas Stars and we see Kyle Connor (who hadn’t played the previous game in Dallas) back in the lineup along with Mathieu Perreault and Nikolaj Ehlers.  The rookie had a solid game which included his first NHL goal, which ultimately proved to be the game winner in a 4-1 Jets win.  Over the next 13 games he would add two more assists to bring his total to one goal and three assists in 19 NHL games.  Worth noting that he missed five games after being taken out by a cross-check into the boards by the Kings Kyle Clifford on November 13th. 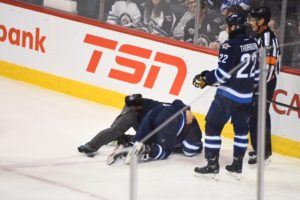 Upon his return on November 25th he got into three more games although his usage decreased from approximately 10 minutes per game to less than five before being sat in the pressbox for five straight games.  The expectation was the Jets rookie would be better served playing big minutes with the Manitoba Moose as opposed to sitting and watching games from the pressbox.  A few weeks back I wrote about the value gained by NHL prospects spending time with the big club.

Yesterday in a scrum Jets coach Paul Maurice indicated the team had a plan for the rookie and that came to fruition today when they assigned him to the Manitoba Moose.  This should be a good opportunity for Connor to play 1st line minutes, in all situations and really continue to develop as a Jets prospect.  For proof just look at his fellow 2015 1st rounder Jack Roslovic who has spent entire season with the AHL club and is currently the Moose points leader.

Fans won’t have to wait long to see Kyle Connor in action for Manitoba as he will likely suit up for tonight’s game against the Cleveland Monsters at the MTS Centre.

**This article was originally intended to be “What is the plan for Kyle Connor?” but as I was writing it he was assigned by the Jets to the Moose, making it somewhat moot.