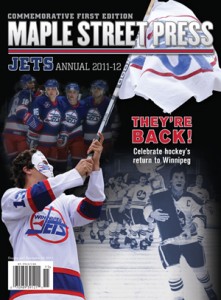 A number of writers for Illegal Curve have contributed to the Winnipeg Jets Annual 2011-2012. published by Maple Street Press. The magazine is available at McNally Robinson in Grant Park Shopping Centre in Winnipeg, MB or you can purchase a copy online.

We will be hosting a launch party October 12, 2011 at McNally Robinson in Grant Park Shopping Centre. RSVP by visiting the Facebook Event Page.

On May 31, greater Winnipeg awoke and realized its dream was a reality: Fifteen years after bolting town, the Jets are back in Winnipeg, and the party is just beginning.

Celebrate the return of a traditional NHL market with the inaugural edition of the Maple Street Press Jets Annual 2011-12, which includes features on: the state of the Jets’ payroll, how certain two-way forwards could help the team, a recap of what was written and said about the franchise in the offseason, and in-depth, season-by-season recaps of the previous incarnation of the Jets.

Shipping from Maple Street Press on August 30, and on newsstands September 13. Pre-order your copy today

Articles appearing in the magazine written by members of Illegal Curve:

The Pay Scale: See how the Jets’ payroll stands up next to the NHL
by Richard Pollock

In Spoken Words: The new Jets are just months old, but much has already been said by, and about, the franchise
by Michael Remis

The Odyssey: There may be no current NHL head coach more deserving of his job than Claude Noel
by Drew Mindell

Build-A-Jets: Statistics, scouting information, and insight on the first draft class of the Jets 2.0
by Kyle Kosior, Ezra Ginsburg, and Benjamin Wendorf

In The System: A plethora of youthful talent is waiting in the wings for its chance to play on the Winnipeg stage
by Kyle Kosior, Ezra Ginsburg, and Benjamin Wendorf

Staying on top of the latest Winnipeg Jets news
Welcome to the New IllegalCurve.com