The Winnipeg Jets and St. Louis Blues will meet tomorrow night for Game 1 of their Western Conference Quarterfinal series at Bell MTS Place in Downtown Winnipeg and it will be the first time in each franchise’s history that they will play each other in the Stanley Cup Playoffs.  (Note: Present franchises of course since the original Jets played the Blues back in 1982 in a Norris Division battle which saw St. Louis win 3-1).  The Jets and Blues both finished the 2018’19 regular season with 99 points but the Jets had more regulation victories. 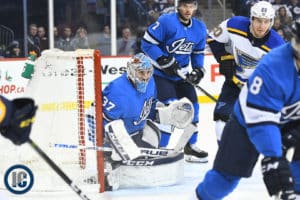 If you are going to give the goaltending edge to the Blues and Jordan Binnington (which I wouldn’t but some are), you have to give the offensive edge to the Jets, who scored 270 goals during the regular season compared to the Blues who scored 244 goals. If you are going to give the special teams edge to St.Louis (9th best Penalty Kill, 10th best Power Play), you have to give the edge to Winnipeg because they have home ice advantage and have been excellent at home over the last two years.

The fact of the matter is that this Jets/Blues series is shaping up to be a great one and the winner could very well end up representing the Western Conference in the Stanley Cup Final. The Jets and Blues both have excellent goaltending, skilled forward groups and a mixture of mobile and physical defensemen. If you’re looking for an X-factor for the Jets, look no further than Josh Morrissey who will play in Game 1 after missing the final 20 games of the regular season due to an upper-body injury. The smooth skating Morrissey has the ability to shut down the NHL’s elite forwards (Hello Vladimir Tarasenko).

Ultimately, this series will inevitably come down to goaltending, depth scoring and special teams and I think the more talented Jets will be able to elevate their game at the right time. I’m taking the Jets in six games but I could easily see this series needing seven games to determine a winner.

I reached out to a collection of hockey writers and broadcasters in Winnipeg and across the hockey world to get their predictions for the upcoming series between the Jets and Blues. Below you will find those predictions..

What do you think? Who do you think will win the series between the Jets and Blues? Let us know in the comments section below.