Hear from some of the legends from the first incarnation of the Jets. 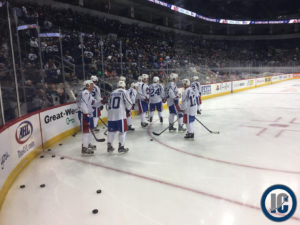 Hear from some of the legends from the first incarnation of the Jets.

Teemu Selanne:  How does it feel to be back in Winnipeg?  Comparing what Laine is going through to what he experienced.  Who was/is a better 18 year old, him or Laine?  Does he feel any rivalry with Edmonton?  Will he shoot the glove if he scores?  When was last time he skated?  What did it feel like to lace up the skates again?  On getting the key to the city.  Ever look back and wonder how he got 76?  What has he shared with Laine about how to handle the attention?  When he heard about the game, who contacted him?  What player sticks out for him?

Dale Hawerchuk:  What does it mean to him that there is a franchise here in Winnipeg?  How often do the alumni get together?  What does it mean to him personally though about the team being back considering his tie to the original franchise?  How difficult was it to make the Jets roster?  Happy to see how many guys who came in even if they weren’t playing?  Any single thing that stands out from the Jets/Oilers rivalry?  Any frustration all these years later that the Jets couldn’t get past the Oilers?  How important was it to have all Winnipeg Jets eras represented on this team?  Has he talked to Gretzky about how the game will be played?  Helmets or toques in the game?  How does he feel physically when he gets out on the ice?  Varying levels of fitness among the alumni.  Mike Ford is the oldest.  Willy Lidstrom getting into both lineups.  On the Heritage Classic event.  Drawing up plays?  Who impressed him out there?  How much time did he take to prepare for this game?

Eddie Olczyk:  Difference in generations, teaching younger players.  What memory against the Oilers sticks out for him?  What will it mean to lace them up against some of the Oilers?

Doug Smail:  Why did he want to be part of the alumni team?  What was it like out there?  Does he still skate a lot? What does he remember about the Oilers/Jets rivalry? Does it remind him of the open Saturday practice back in Winnipeg?  Regret in not being able to beat the Oilers?  What does he think of the Jets returning to Winnipeg?  What were his initial thoughts when he heard about the Alumni team?  What was the call like?  Has he been down to the stadium?