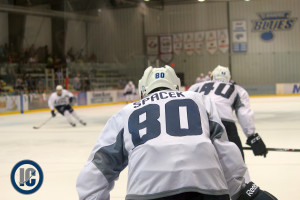 The Jets have signed their 2015 4th rounder to a three year entry level contract.  I had the chance to watch Spacek play with the Moose to end the 2016-17 season and his skill was quite evident on the ice.  In four games with Manitoba he had one assist.

The Winnipeg Jets announced they have agreed to terms with forward Michael Spacek on a three-year, entry-level contract with an annual average value of $833,300.

Spacek, 20, led the Red Deer Rebels in scoring last season with 85 points (30G, 55A) in 59 games. He added 12 points (4G, 8A) in seven playoff games. During two seasons with the Rebels, he had 139 points (48G, 91A) in 120 games. Spacek finished his season with the Manitoba Moose, where he had an assist in four games. He also suited up for the Czech Republic for the third straight season at the World Junior Championship, posting three points (1G, 2A) in five games.

Spacek was drafted by the Jets in the fourth round (108th overall) of the 2015 NHL Draft. He’s the fifth of the Jets’ eight selections from the 2015 NHL Draft to sign an NHL entry-level contract, joining defenceman Sami Niku and forwards Kyle Connor, Jack Roslovic and Jansen Harkins.