No ban for Bogo. Miettinen expected to arrive today. Jets fans making a difference. Winnipeg Jets fans calls for the return of the trough. Wait – the Jets are in the playoff picture. As memories, landmarks fade, fans cope with loss of Thrashers. Six months later, here’s what Thrashers fans are saying.

Note:  Kulda has been reassigned to the IceCaps.

Winnipeg Free Press:  No ban for Bogo/Miettinen expected to arrive today.  He will not be seeing any action before Saturday and even that isn’t for sure.

Winnipeg Sun:    Jets fans making a difference.  You really won’t get it until you are sitting inside the MTS Centre as 1 of 15,004 other fans cheering on your Winnipeg Jets.  Words simply fail trying to capture the environment during game time. 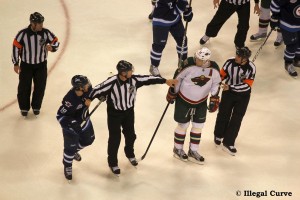 Winnipeg Sun:  Lineup questions remain for Jets.   Lots of possible changes to the lineup before Thursday’s game against the Capitals possibly.

CBC:  Winnipeg Jets fans calls for the return of the trough.    I am all for nostalgia but some things are best left in the past.  Having said that there is clearly a problem with lineups at the bathrooms.  One would expect that these lines are costing True North money as people in line to use the bathroom is less time spent in line to buy concessions.  Expect True North to rectify the problem.

the Score:  Wait – the Jets are in the playoff picture.  Are the Jets for real?  That is the question fans keep asking themselves as they have beaten teams like the Bruins and Wild at home, and are riding a 5 game home winning streak into their Southeast division match-up with Washington on Thursday.

Atlanta Journal Constitution:  As memories, landmarks fade, fans cope with loss of Thrashers.  As we here in Winnipeg can understand all too well, it isn’t easy to get over the loss of a hockey team that you invest yourself in financially, emotionally and in all other facets of our lives.  The article below illustrates this.

Atlanta Journal Constitution:  Six months later, here’s what Thrashers fans are saying.  Another example of the Thrashers fanbase, small but dedicated, voicing its dedication to the sport we all love.

Washington Post:  Jay Beagle, Matt Hendricks will make trip with Capitals.  The Caps used these lines in practice and you can probably expect to see these repeated in Winnipeg:

Washington Times:  Status of Mike Green still unclear.  Jets fans won’t be too upset about not seeing the offensively minded Green in the Caps lineup tomorrow night at the MTS Centre.