Globe and Mail:  Jets hear the call of the Wild.  Coach Noel is clearly impressed by Wild coach Mike Yeo.  He spoke of the time they faced each other in the AHL (a 1-0 Moose victory over the Aeros) and what he learned about him then and what he expects from him tomorrow night.

Winnipeg Free Press:  Jets look for redemption after drubbing in Detroit but face NHL leader.  In order to be the best, you need to be able to beat the best, and the Jets will get to test their resolve, following the difficult loss to Wings when they match themselves against the #1 team in the NHL.

Winnipeg Free Press:  Noel only shows first period of Wings debacle.  The Jets coach has a coaching philosophy that is all his own and he does what he thinks is in the best interest of his team.

Winnipeg Sun:  Quartet of key Jets day-to-day.  While there were no red jerseys on the ice today at practice, the Jets were without Byfuglien and Antropov. 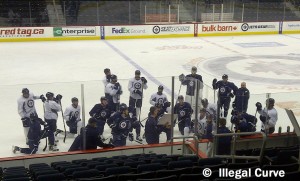 CBC:  Jets licence plates a hot ticket in Winnipeg.  I’m not surprised that they sold, although once again Winnipegger’s show their impatience with allowing anything Jets related to sit on the shelves as lot of the autopac retailers were sold out in just over an hour.

The Telegram:  Sharks go back for seconds against IceCaps.   Looks like the baby Sharks have taken a bite out of the Jets farm team for a second time in past couple of days.  The Caps are still the class of the AHL, and will head out on the road to take on the Manchester Monarchs in New Hampshire on Friday night.

StarTribune:  Clutterbuck returns, will skate on top line.  Much like the Jets, the Wild practice was rather full, and similar to the Jets they also are not expecting all their players back right away.  Looks like the lone change will be Clutterbuck’s insertion into the lineup.

NHL.com:  Matt Hackett – 2nd star of the week.  You would have thought throwing a rookie into the mix would impact the Wild, but the nephew of former NHL goalie Jeff Hackett played extremely well for Minnesota this week coming in for an injured Josh Harding.  In his two games with the Wild he has 2 wins, a ,974 save % and a GAA of 1.01.