Note:  As always, stay tuned to Illegal Curve following tonight’s Jets/Canes game as we will have all the post-game audio from both rooms plus our post-game podcast, hosted by Drew Mindell and featuring analysis from Richard Pollock of the Illegal Curve Radio Show.

Globe and Mail:  Jets wary of new-look Hurricanes.  With good reason.  Jets are going to need a quick start.

Winnipeg Free Press:  Jets vs. Canes – two teams in transition.  Tonight is going to be quite the test for both teams.  The Jets need to show they won’t have a let down game and the Canes want to show that Wednesday’s win in Edmonton wasn’t a fluke.

TSN:  Jets host Hurricanes on TSN.  A Friday night tilt to wrap up a very successful home stand for the Jets.  After dropping the first game of five at the MTS Centre to Ottawa, the Jets have won 3 straight and would like to put the cherry on top with a win tonight against the Canes.

CBC:  Improving Jets settling into Noel’s coaching style.  There was definitely some ‘getting to know you’ time at the beginning of the season, but there are enough veteran guys on this team to figure out what the coach likes and dislikes are.  The 7-2-1 run in their last 10 show they have been listening. 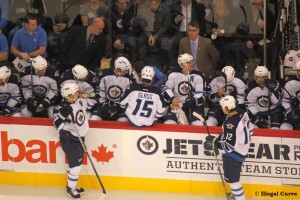 News and Observer:  Canes trade Kaberle to Canadiens.  Have to imagine that Kirk Muller had a hand in this deal having both played with Spacek as a player (on the Panthers) and having coached in Montreal for past 5 seasons.

Detroit News:  Helm relishes chance to finally play Winnipeg.   Helm doesn’t get to face the Jets in his hometown this year, but next season he will be seeing the Jets plenty in Conference B.  Having seen Helm’s blazing speed, I can tell you that the speedy centre can be a dangerous player tomorrow night.

Mlive:  Pavel Datsyuk will play.  Looks like the Jets won’t be able to avoid facing Pasha.  I watched this guy playing at Joe Louis Arena a number of times and the things he can do with a puck are simply spectacular.