Next opponent news – Florida Panthers: Versteeg back from flu in time to face Jets. Season-saving path nothing new for Clemmensen.

Note:  The Jets announced that there are just 2000 specialty license plates remaining.

Globe and Mail:  Coach Noel talks trade deadline.  Nothing yet to talk about but fans will be on the edge of their computers for all of February.

Winnipeg Free Press:  ‘We just have to find a way to win’ says coach Noel.  While game number 53 in the schedule won’t end the season if the Jets don’t pull off the victory, it would be nice if the Jets can show some toughness and pull off their first victory in the 2nd game of a back-to-back. 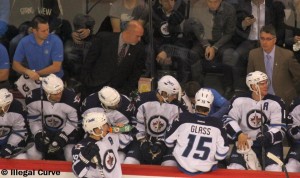 TSN:  Mason to start against Panthers.  Brian gives you both the Jets and Panthers projected lines for tonight.

Winnipeg Sun:  Mason gets call for Jets.  Facing a rested Panthers team would be a big test ignoring the fact that the Jets have played 2 games in the previous 3 days.

Jets Official Site:  Jets vs. Panthers preview.  Some facts and figures to be aware of before puck drop tonight.  If you are looking for a place to watch the game, why not join IC at the Cheer tonight.

NHL.com:  Versteeg back from flu in time to face Jets.  He has been a Jets killer and one of the Panthers most dangerous players all season long.

NHL.com:  Season-saving path nothing new for Clemmensen.  Having witnessed exhibit A I can tell you that the play of Clemmensen was spectacular and won the game for his team.