Note: After the game, be sure to check us out for all the post-game reaction.  As soon as the site is updated we notify you via twitter @illegalcurve and Facebook.

Note II: For away games we have our #ICGWG contest. Make sure to @ tweet @illegalcurve with your guess. Remember that for your vote to qualify you must send in your guess using a hashtag (#). (i.e. #ICGWG Wheeler).

Winnipeg Free Press:  Jets can expect Edmonton to be ‘ornery’.  We are going to see these Oilers react to all the frustration in the fan base tonight and luckily for the Jets it is likely going to be quite the feisty contest. 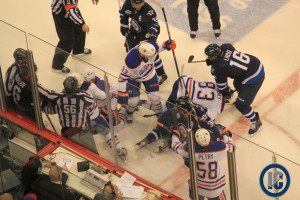 Winnipeg Sun:   Jets, Oilers both desperate for a win.  Both teams need to win this game.  The Oilers because of jersey-on-ice-gate and because Winnipeg needs to head into the break with some joy.

Illegal Curve:  Coach Noel pre-game.  Does he need to say more to get his troops motivated?  Does he expect Stuart to be a player?  Big difference heading into the Christmas break with a win vs. a loss.  What’s the plan with the goalie (Pavelec).  What went into that decision?  What would he do if a Jets fans tossed a Jets jersey on the ice at MTS?  Consistency talk.  How much has Mark Scheifele’s game grown since his first game this season at Rexall?  Could he be a number one centre in this league?  Challenge the Oilers present..

Illegal Curve:  Game Day Set-Up.  Ezra looks at both teams and gives you some thoughts as well as the starting goalies and projected lineups.

Illegal Curve:  Jets Morning Papers.  If you missed any of the Jets or Oilers news we have you covered.