Note: Puck drop is at 9:30 pm CST tonight for today’s game against the Sharks.  After the game, be sure to check us out for all the post-game reaction.

The Athletic Winnipeg: Evaluating Winnipeg’s defence at the quarter-season mark. (Paywall). Murat breaks out his highlighter to hand out some grades to the goalies and defenceman of the Jets.

Winnipeg Free Press: Jets hope for repeat performance from Hellebuyck in face of Shark attack. (Paywall). They should also hope that they can control the puck a wee bit more than they did the last time these two teams met.

Winnipeg Sun: Jets Hellebuyck putting up MVP performance this season.  There is no question who the MVP of this season has been to date. 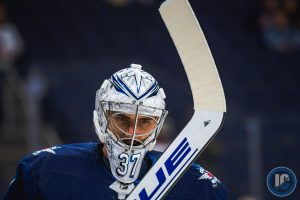 San Jose Mercury News: Five reasons why the Sharks turned their season around.  If you want to learn about the Jets opponent and the hot streak they are on check out this column.

NHL.com:  On the Right Path.  How having a plan for after retirement keeps Grant Clitsome busy with what he loves.

Illegal Curve: Jets vs. Sharks pre-game report. The Jets held an optional morning skate followed by a media availability before they take on San Jose which takes place at 9:30 pm CDT. Check out the projected lines and D pairs and hear from Andrew Copp and Nikolaj Ehlers.

The Athletic Winnipeg:  The 2010’s: Winnipeg Jets All Decade Team.  Murat and Ken present the top 6 Winnipeg Jets, per position. Left Wing might shock you. This is a must listen for Jets fans. Plus, Ken and Murat discuss some players that just missed the cut, as the Jets 2.0 celebrate their first decade back in the National Hockey League.

Illegal Curve:  Coach Maurice pre-game scrum.   Scrum topics –  Thoughts on Winnipeg winning the Grey Cup.  His relationship with Bombers head coach Mike O’Shea.  On letting his players see a team in Winnipeg win a championship.  Who goes in for Nathan Beaulieu?  What Connor Hellebuyck did for the Jets the last time they were in San Jose.  The play of the Sharks since they last played.  How does he feel that Tucker Poolman has adjusted?  How have they defended against offensively minded defencemen?  What does a regular fan not know about what a good goalie does for the five guys in front of him?  Is Hellebuyck team MVP to this point?