Note: Puck drop is at 9:00 pm CDT tonight for today’s game against the Golden Knights.  After the game, be sure to check us out for all the post-game reaction.

The Athletic Winnipeg:  After long journey to NHL, hard-working CJ Suess relishes debut.  (Paywall).  Ken captures the experience for the Minnesota product.  I actually liked the way the camera caught him peering around during the anthems. 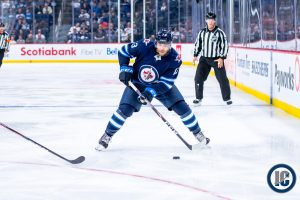 NHL.com:  Subban makes start for Vegas; Brossoit gets call for Winnipeg.  Check out this preview ahead of puck drop.

Winnipeg Free Press:  Time for Scheifele, stars to shine.  (Paywall).  Now Mike wrote this before 55 set up 26 for the go ahead goal in the 2nd period of last night’s game.  But the point remains that if this Jets team is gonna do anything the top players are gonna be the ones doing the majority of the heavy lifting.