Note II: After the Jets game, be sure to check us out for all the post-game reaction. As soon as illegalcurve.com is updated we notify you via Twitter | Facebook | Instagram.

Winnipeg Sun:  Byfuglien’s back.    It will be interesting to see if Big Buff is eased back into the lineup or if he is thrown into the deep end of the pool. We suspect the latter. 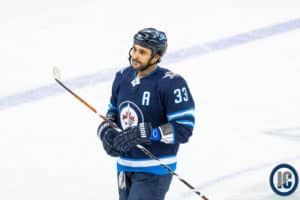 Winnipeg Free Press:  Byfuglien expected to make immediate impact against Habs.  (Paywall).  As we discussed during our Jets segments on today’s Illegal Curve Hockey Show the Jets big man has such a significant impact on this team both on the ice and on the bench.

Illegal Curve: Jets vs. Canadiens pre-game report. The Jets were on the ice today in Winnipeg as they prepared to face Montreal at 6:00 pm CT. Includes projected lines, D pairs as well as audio from Nikolaj Ehlers and Jacob Trouba.

TSN: Jets excited for the return of Byfuglien. Out since mid-February with an ankle injury, Dustin Byfuglien is expected to make his return to the Jets’ lineup tonight against the Canadiens, and his teammates couldn’t be more excited.

Illegal Curve: Coach Maurice pre-game. Topics included – Does it feel like the final regular season home game?  On Dustin Byuglien being on the second power play unit.  What does Jack Roslovic have to do to stay in the lineup?  What are the benefits for a young player dealing with adversity?  What does it mean to have a healthy competition for spots?  Can he put a finger on what isn’t going right with Nikolaj Ehlers game?

Topics: Jets-Islanders Recap, Dustin Byfuglien’s return to the line-up and the impact he can have, Jets/Canadiens Preview, Kyle Connor back up on the top line with Scheifele and Wheeler.