Winnipeg Free Press:  Ehlers moves to top line as Jets kick off final homestand of season.  (Paywall).  Should be quite the contest this evening at Bell MTS Place when these two teams get together. 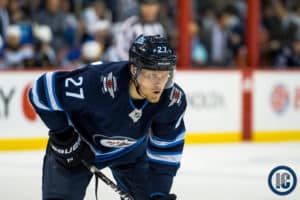 Winnipeg Sun:  Good news for Brossoit, as Jets prepare for showdown with Preds.  Sure sounds like it will be minor for the Jets backup.

Illegal Curve: Jets vs. Predators pre-game report. The Jets were on the ice today in Winnipeg as they prepared to face Nashville at 6:00 pm CT. Includes projected lines, D pairs as well as audio from Nikolaj Ehlers and Matt Hendricks.

TSN: Jets set for ‘rivalry’ game against Preds. With top spot in the Central Division still up for grabs, the Jets are amped up to face the Predators and I think it’s pretty safe to say that based on last season’s second round series and the games this year, this is one of the best rivalries, if not the best rivalry in the NHL.

Sportsnet:  Jets & Predators jacked up for playoff-type game.  The Jets and Predators both know they built a good rivalry after last season’s playoffs, and they’re looking forward to going head-to-head as the regular season comes to a close.

Illegal Curve: Coach Maurice pre-game. Topics included – Update on Brossoit?  Did he have a plan for his goalies this week? Update on Byfuglien/Morrissey?  Putting Ehlers with Scheifele/Wheeler.  How much longer does he want to tinker with his lineup?  On inserting Hendricks for Roslovic.  What does Roslovic have to show him to be a regular in the lineup?  On the importance of tonight’s game.  On the offensive weapons from players like Patrik Laine/Kyle Connor early in their careers.  On the top line allowing guys to find their games.

Topics: Jets Week in Review, Patrik Laine’s goal scoring struggles are back, Jets/Predators Preview, Paul Maurice shakes up the forward lines by putting Nik Ehlers on the top line and moving Patrik Laine to the second line with Kevin Hayes and Kyle Connor, Ben Chiarot’s career season and his next contract

Topics: Evaluating the Stars, Wild, Avalanche and Blues as the Jets likely 1st round opponents, You Bet Your Contest (Saturday We’ll Call You Bonus Play), The Columbus Blue Jackets lose two games in a row to Calgary and Edmonton and their playoff hopes, Eugene Melnyk’s comments about the Toronto Maple Leafs