Sportsnet:  Jets not fretting criticisms with playoffs approaching.  A look at how the Jets are dealing with concerns that they aren’t at the same level they were at last season at this time.

Winnipeg Free Press:  Jets, Sharks both hungry for home ice in playoffs, Myers says.  (Paywall).  Mike gets you set as both teams look to increase their first place leads in their respective divisions. 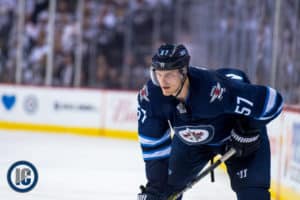 The Athletic Winnipeg: Q & A on all things Winnipeg Jets. (Paywall). Folks had questions and Murat had answers on the local NHL squad.

San Jose Mercury News: Sharks’ Martin Jones is playing his best hockey of the season. While this is about last night’s game the Sharks played (and won) in Minnesota it still provides insight into the Jets opposition.

Illegal Curve: Jets vs. Sharks pre-game report. The Jets were on the ice today in Winnipeg as they prepared to face San Jose at 7 pm CT. Includes projected lines, D pairs, health news as well as audio from Tyler Myers and Mark Scheifele.

TSN: Still no timetable for Byfuglien’s return as homestand begins. With a month to go until the playoffs, the Jets have returned home to kickoff a difficult three-game homestand. Sara Orlesky has more from Bell MTS Place and how this will help the team round their game into shape before the second season begins.

Illegal Curve: Coach Maurice pre-game. Topics included – Any update on Dustin Byfuglien?  What are the biggest challenges the Sharks present?  Specific challenges of Brent Burns?  Are the expectations higher or are they still trying to find a way to be as good as they were at this time last year?  Is it fair to look at this week as a measuring stick or do the injuries offset that?  How can this set of three games help this team?  Is Byfuglien skating at all?  What did they do well defensively in Washington?  Any update on Vesalainen?