Winnipeg Sun:  Petan keeping open mind: Jets forward could be moved before deadline.  I thought he handled the questions this morning quite well given the circumstances.

Winnipeg Free Press:  Jack Roslovic cramps up during morning skate, status tonight in doubt.  (Paywall).  After having a nice game against his hometown Jackets it looks like he will be a game time decision for Winnipeg.  Which means the much talked about Nic Petan could draw back in for the Jets. 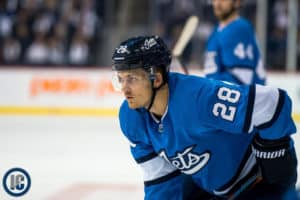 The Athletic California: Rejuvenated and energized, Corey Perry is ready to return from knee surgery. (Paywall). Jets fans will certainly have some nice welcome back chants for their least favourite member of this Anaheim team.

Illegal Curve: Jets vs. Ducks pre-game report. The Jets were back on the ice today in Winnipeg as they got ready to face Anaheim at 6:00 pm CT. Includes projected lines, D pairs, health news and starting goalie as well as a health update and audio from Kyle Connor and Tyler Myers.

Illegal Curve: Coach Maurice pre-game. Topics included –  On Jack Roslovic leaving skate early.  Hellebuyck getting start.   Same D pairs?  On status of Byfuglien.  On a new look Ducks team.  Is there an advantage to facing the Ducks after they’ve had a long break?  On how Nic Petan has handled being out.  Where would Petan fit in?