Winnipeg Free Press: Jets lace up for critical Game 3 in Vegas. (Paywall). Mike previews the game from his spot in Vegas.

Las Vegas Review-Journal: Knights goalie Maxime Lagace placed into backup role for Game 3.  If you’re a Golden Knights fan all that really matters is that Marc-Andre Fleury is feeling good.

Las Vegas Sun: With series back in Las Vegas, 3 keys for Golden Knights to beat the Jets.  Three thoughts on how the Jets opposition looks to win the game tonight.

Sportsnet: Winnipeg confident coming off loss.  The Jets have handled winning the same way they have handled losing pretty much the entire season and aren’t looking to change things up.

The Athletic: With focus squarely on hockey, Jets may be able to feed off energy of hostile Vegas crowd. (Paywall). Nobody in the NHL has figured out the formula to keeping that rabid Vegas crowd at bay.

NHLcom: 5 Keys: Jets at Golden Knights, Game 3.  Another preview ahead of tonight’s action.

L.A. Times: Winnipeg fans winging it to Las Vegas to see another fascinating NHL playoff story. Jets fans have proven the last few years to be a pretty solid traveling fan base so it isn’t a big surprise that there will be some white in the T-Mobile Arena and on the streets of Vegas. 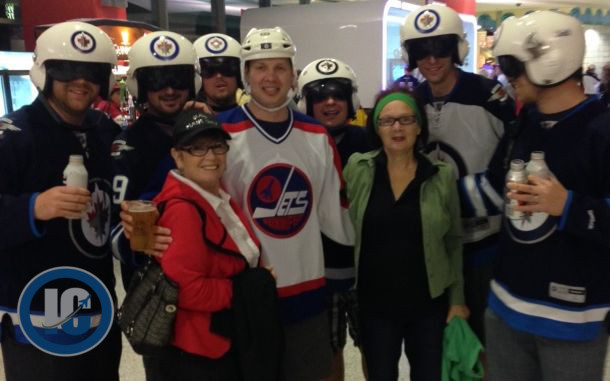 NBC Sports: Golden Knights’ top line could torment opponents for years.  Who knew before the start of the season that this trio would be so deadly.

Toronto Star: Sweet revenge for Winnipeg and Hamilton. Not sure folks in either market feel like this is sweet revenge as opposed to simply reveling in the success of their respective teams. Who really gives other markets a thought when you are busy supporting your team (and yes I’m aware that people still do).

USA Today: From Bryce Harper to Lil Jon: Every one is trying to get in on Vegas Golden Knights action.   It wouldn’t be Sin City without celebs in attendance.

Illegal Curve:  Jets vs. Golden Knights Game 3 Round 3 pre-game report. The Jets skated today as they got ready to face Vegas at T-Mobile Arena tonight ahead of game 3.  Includes scrums from Blake Wheeler, Patrik Laine, Mark Scheifele and Kyle Connor.

TSN: Jets not intimidated by Las Vegas crowd. Having played in some raucous buildings earlier in the playoffs, the Jets say they aren’t too worried about the crowd tonight in Vegas, and say that Bell MTS Place is pretty loud itself.

CBC: New hockey fans cheer on the Winnipeg Jets. People are rallying around the Winnipeg Jets as they make their way toward the Stanley Cup final. But many people who are new to this country — and new to hockey — are discovering the team for the first time.

Illegal Curve:  Coach Maurice pre-game.  Topics included – Making adjustments, will Vegas try to beat them the same way Nashville tried to beat them?  Why has the team been so good at adjusting so they haven’t lost two games in a row?  On the Winnipeggers coming to Vegas.  A small market having success in the NHL.  On the evolution of his relationship with Jets GM Kevin Cheveldayoff.  On the type of player the Jets have in Josh Morrissey.