TSN:  Poolman unfazed by playoff pressure after unlikely path to NHL.  The product of East Grand Forks, Minnesota has quite the back story.

Winnipeg Sun: Jets without Morrissey, but likely adding veteran D back to mix.  Ken sets you up for tonight’s game 5.

Winnipeg Free Press:  Jets’ depleted defence unit gets big boost as Myers returns to action.  (Paywall).  The right side is looking like how the Jets would anticipate things if everyone was healthy but that left side isn’t quite what you would expect. 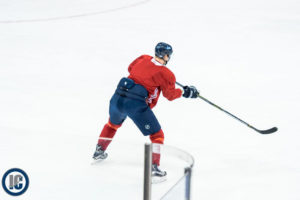 Minneapolis Star Tribune:  Wild must overcome bad math to stay alive against Winnipeg.  It is certainly gonna be an uphill climb if they have any hope to stay alive in this series.

The Athletic Winnipeg:  The Jets’ defensive depth is stretched to the limit. How should they play Game 5?  (Paywall).  The D depth got some good news today thanks to Tyler Myers returning to the lineup and with Tobias Enstrom back skating.

Sportsnet:  Winnipeg gets boost with return of Tyler Myers.  It will be a big boost…literally.

Sportsnet:  Welcome to Winnipeg, the best place to watch the playoffs.  Awesome photo gallery of Winnipeg during the playoffs.

TSN:  Myers to play in Game 5, says he wasn’t injured on Foligno ‘punch’.  It was the punch heard around the world by everyone except Tyler Myers who claims the injury had nothing to do with a punch.

Illegal Curve:  Jets vs. Wild Game 5 Round 1 pre-game report. The Jets skated today as they got ready to face Minnesota at Bell MTS Place tonight ahead of game 5.  Includes scrums with Blake Wheeler and Tyler Myers.

TSN 1290 Winnipeg:  Jets depth once again being highlighted.  TSN’s Bob McKenzie joined the Big Show to touch on the Maple Leafs’ disappointing loss against the Bruins, Bill Peter’s coaching future as well as the Winnipeg Jets biggest strength and why their depth has other Western Conference playoff teams fearful.

Illegal Curve:  Coach Maurice pre-game scrum.  Topics included – Is Tyler Myers in? On potential different pairings for the D. On the fourth win of the series being the hardest W. Status of Steve Mason. The intangible of Myers coming back. Any info on what happened to Mason? On what appeared to be the seriousness of Myers injury and how it turned out not as bad as originally believed. How important was it to send him back to Winnipeg after game 3? Right handed D playing on the left side. How does he decide who goes on which side? Perreault/Enstrom back on the ice? Any temptation to put Tanev back with Lowry and Copp?