Note II: Jets GM Kevin Cheveldayoff joined Andrew Paterson and Rick Ralph in studio on the afternoon ride yesterday. They discussed the Winnipeg Jets win over Nashville, clinching a playoff berth, the number of draft picks currently in the Jets lineup and what the future holds for the franchise. It runs for 39 minutes and you can listen to it here.

Winnipeg Sun: After suffering gash on chin, Laine says ‘Just save the beard’.  I said after we saw the gash on Sunday night that fans should run out to the concession stands to grab some ketchup for their fake beards to keep it authentic.  Clearly the Jets sniper is attached to his facial hair.

Winnipeg Sun:  Young guns Laine, Connor and Ehlers have combined for 100 goals this season, 40% of Jets scoring.  Jets certainly are getting some bang for their buck thanks to these young guns.  May need a new version of the Young Guns poster from the Jets 1.0 days.

Winnipeg Sun:  Jets defenceman Tyler Myers recognized for ability to bounce back with Bill Masterton nomination.  A worthwhile nominee for everything that he was able to overcome. 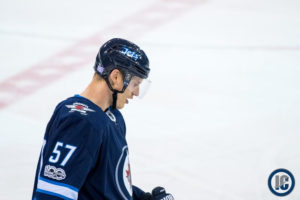 Winnipeg Free Press:  Masterton nominee Myers an inspiration.  (Paywall).  Hard to think of a more compelling story on the Jets.

Illegal Curve: Jets vs. Bruins pre-game report. Take a look at what happened at the rink this morning as Winnipeg gets ready to face Boston at Bell MTS Place tonight with pre-game scrums with Blake Wheeler, Joe Morrow, Nikolaj Ehlers and Tyler Myers as well as goalie news.

TSN:  Jets focused on style of play, rest, not first in Central Division. Despite sitting five points behind Nashville for first place in the Central Division and the Presidents’ Trophy being within reach, the Jets are focusing on securing home ice in the first round, rest and maintaining their style of play.

Illegal Curve: Coach Maurice pre-game scrum.   Topics included – On the youth producing a big chunk of the Jets goals.  Is there anything that this organization does that helps young guys develop as quickly as they have?  What are his priorities down the stretch?  Is there an update on Trouba?  How does he envision the number two goalie situation work out?  Is Hutchinson’s reassignment a conditioning stint?  Is there anything that he does from the bench in terms of line changes when they are possessing the puck?  Can he sense when a dominant stretch is coming?  Over passing.  Does he anticipate sitting some guys (to get healthy)?  Is there a stronger message now to guys doing the right things to be healthy?  Has he noticed a difference in the way they play in one goal games?