Note:  Tune into the NHL Mid-Week Show on TSN Radio 1290 tonight from 6 pm to 8 pm as the guys discuss all the latest NHL news.  Guests:  Pat Hickey (Montreal Gazette) and Andrew Gross (The Record)

Winnipeg Free Press:  Down but not out heading into final regular-season game.  One last chance for romance as Winnipeg can only win Thursday and then they have to pray for some help.

Winnipeg Sun:  Noel gives Pavelec big endorsement.  Coach Noel was quite effusive in his praise of his number one netminder.  Pavelec is often maligned for his less than stellar numbers but coach Noel played some serious defence for Ondrej today.

Sportsnet:  Jets are a long ways out.  So close but yet so far.  Of course you have to play the games and it isn’t inconceivable, despite being highly unlikely, that all the stars align for Winnipeg to get into the playoffs.

Illegal Curve:  Coach Noel post-practice audio.  Talking about the Capitals game.  Moving past yesterday’s game.  Difference in this team.  Is team better today than they were a year ago?  Has Pavelec taken his game to another level?  Goals for and against talk.  Quality of chances.  Talk of Pavelec’s numbers, is it reflective of his play?  Bogosian update.  Did he see the review of the Gagnon non-goal?  Anyone available tomorrow that wasn’t before? 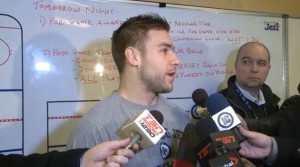 Illegal Curve:  Morning Papers.  If you missed any of the news from this morning, we have you covered.