Sportsnet:  Connor among star NHL rookies flying under the radar.  They really wanted to illustrate that headline by cutting Kyle Connor (for the most part) out of that picture.  As someone who has watched almost all of this NHL and AHL games I’m not really surprised by his play but it is easy to get overlooked when guys like Wheeler, Laine, Scheifele are on your team.

Winnipeg Sun:  No structural damage for Jets’ centre Mark Scheifele.  The news could have been a lot worse for a Jets team that looked like it was firing on all cylinders and starting to get healthy again. 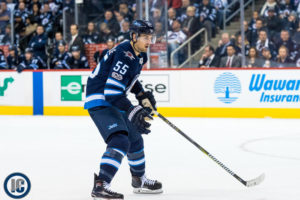 Winnipeg Free Press:  What in the Devils? Jets in a Jersey jam with Scheifele on shelf, Mason hurt again.  (Paywall).  Mike tees up tonight’s game action from Newark.

Winnipeg Free Press:  Jets game-day routines.  (Paywall).  An interesting read from Mike on what some of the players will do on a gameday or some “interesting” things they’ve seen players do as they get ready for a game.

Winnipeg Free Press:  Dump & Chase.  (Paywall).  No Chase for this one so Dump aka Mike McIntyre goes solo for this week’s edition of their online which includes Trash talk, trolls, Turkulainen and more.

Illegal Curve: Jets vs. Devils pre-game report. Take a look at what happened at the rink this morning as Winnipeg gets ready to face New Jersey at Prudential Center tonight and check out the health updates on Mark Scheifele, Tyler Myers, Mathieu Perreault, Jacob Trouba and Adam Lowry.

TSN 1290 Winnipeg:  No rush to get Scheifele back in the lineup.  TSN 1290 Jets analyst Josh Green joined host Kevin Olszewski with a preview of Thursday’s game against New Jersey and to weigh in on injuries to Mark Scheifele and Steve Mason.