Winnipeg Free Press:  Roslovic relishing role on Jets.  (Paywall).  Those of us who watched him dominating in the AHL this season aren’t surprised to see his quick transition up to the NHL has been as smooth as it has been.  Mike has more with the 2015 first rounder. 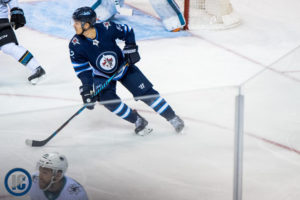 Winnipeg Sun:  Jets not worried about lack of scoring as Canucks come to town.  The high scoring Jets haven’t scored much of late but bench boss Paul Maurice knows that as the games get more and more important they will also get tighter and tighter.  Ted previews tonight’s game.

Illegal Curve:  Jets vs. Canucks pre-game report.  Take a look at what happened at the rink this morning as Winnipeg gets ready to face Vancouver at Bell MTS Place tonight with a pre-game chat with Nikolaj Ehlers, Mathieu Perreault and Jack Roslovic.

TSN:  Roslovic staying patient, knows the goals will come.  Despite having a few good chances, Jack Roslovic is still searching for his first NHL goal, but the top prospect says he knows the goals will come if he stays patient and continues to work hard. The Jets, meanwhile, discuss the challenges of facing the Canucks on a back-to-back and the tight standings in the West.

Illegal Curve:  Coach Maurice pre-game scrum.  Which goalie tonight?  Health updates (Lowry, Mason, Scheifele & Matthias).  Same lineup?  On if the offence has been there for the Jets.  On the level of parity in the NHL.  Keys to success against the Canucks.  Are the Jets better prepared to handle grinding, low scoring games?  On Roslovic’s play.