Winnipeg Sun:  Two hot teams meet on Halloween.  Usually fairly good contests when the Jets and Wild do battle.  Ken gets you ready with his pre-game report from Minnesota.

Winnipeg Free Press:  Jets coach not messing with lineup, Connor Hellebuyck gets second-straight start.  (Paywall).  If it ain’t broke, don’t fix it according to the Jets bench boss and so we will see the same lineup that tuned the defending Stanley Cup champs.

Winnipeg Free Press:  Kyle Connor makes his mark during latest call-up.  (Paywall).  He took his assignment to the Moose in stride, contributed down in the AHL and quickly found himself back up with the big club and on the top line. 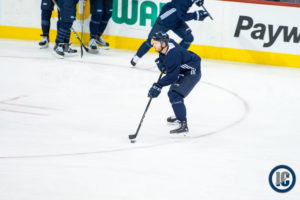 TSN:  After blowing out Pens, Jets set sights on Wild.  It will be interesting to see what Jets team hits the ice tonight in St. Paul.

Illegal Curve:  Jets vs. Wild pre-game report.  Take a look at what happened at the rink this morning as Winnipeg gets ready to face Minnesota at XCEL Energy Center tonight.  Player audio: Blake Wheeler & Kyle Connor.

Illegal Curve:  Coach Maurice pre-game.   Facing the Wild.  Hellebuyck in net?  Same skaters as last game?  What has he noticed about Kyle Connor’s game?  On Connor being more involved in the forecheck.  Does he like the way lines third and fourth lines are trending?  Update on Adam Lowry?  On Matthias chipping in a couple of helpers.