Winnipeg Sun:  Jets look to return to win column vs. Penguins.  Lots of focus on the Jets taking advantage when they get a man advantage today following skate.  Ken gets you set up for the game.

Winnipeg Free Press:  Byfuglien move was playing possum.  (Paywall).  There was some consternation from fans on the game winning goal in Columbus on Friday however coach Maurice saw the play develop differently than those who felt big #33 was lazy in his retrieval of the puck. 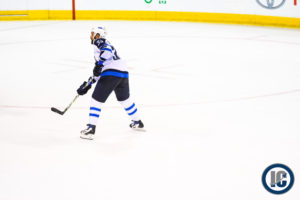 Illegal Curve:  Jets vs. Penguins pre-game report.  Take a look at what happened at the rink this morning as Winnipeg gets ready to face Pittsburgh at Bell MTS Place tonight.  Player audio: Patrik Laine and Blake Wheeler.

Illegal Curve:  Coach Maurice pre-game.   Lineup moves?  Status or Armia?  Status of Lowry?  On the Jets power plays and how to improve it.  Are teams being more aggressive at blueline when killing a penalty?  Is 3 on 3 something teams practice?  What was his take on the Blue Jackets OT winner?  On the way Byfuglien played in the OT?  Hellebuyck starts?  Status of Perreault?  Where is the Jets belief level?  What is the most important key when facing Penguins?