Winnipeg Sun:  Byfuglien returns to Jets lineup.  Ken sets you up for tonight’s game with this preview. 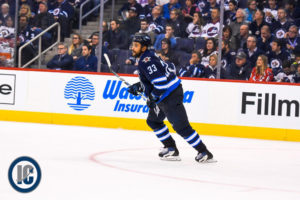 Winnipeg Free Press:  Big Buff back on the ice tonight against Carolina.  (Paywall).  The big defenceman will be back plying his trade for the Jets which means Tucker Poolman comes out of the lineup.

Illegal Curve:  Coach Maurice pre-game.  Topics included – Status of Adam Lowry.  What he’d like to see from Byfuglien.  On starting Connor Hellebuyck for the third straight game.  What is he looking for from Joel Armia?  What does he expect from the Hurricanes?  Does he see similarities between the two rosters?  On the challenge of the home game.

Topics:  Surprising starts to the 2017’18 NHL Regular Season, Eight “Off the Wall” Ways to Improve the Game, Alex Galchenyuk continues to struggle in Montreal.