Winnipeg Sun:  Jets look for consistency as road trip hits Vancouver.  Ken sets you up for tonight’s game with this preview. 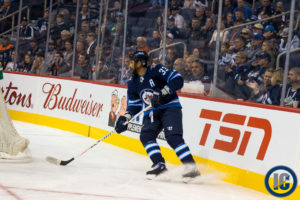 Illegal Curve:  Jets vs. Canucks pre-game report.  Take a look at what happened this morning at the rink this morning as Winnipeg gets ready to face Vancouver at Rogers Arena tonight.  Player audio: Tyler Myers, Dmitry Kulikov and Mark Scheifele.

TSN 1290 Winnipeg:  Byfuglien seen limping, skating gingerly.  Ken Wiebe of the Winnipeg Sun joined the Afternoon Ride to discuss the circumstances surrounding Dustin Byfuglien being out of the Winnipeg Jets game in Edmonton and then Vancouver. Wiebe shares his thoughts on Tucker Poolman’s performance in relief on the blue line, and looks ahead to the Jets-Canucks matchup.

TSN 1290 Winnipeg:  Maurice under pressure from own expectations.  TSN Hockey analyst Dave Poulin joined the Afternoon Ride to discuss how the early games in an NHL season are tough on coaches as they try to evaluate their teams. Poulin also says that Winnipeg Jets head coach Paul Maurice is under presser from himself first, knowing what sort of team he has. Poulin continues to say that, if Maurice is able to solidify the Jets goaltending, that’s one big goal completed for the organization.

Sportsnet:  Tape to Tape NHL Broadcast.  The guys look at some early season trends after the first week of play and specifically about the Jets starting goalies which begins at the 22:20 minute mark and runs to 26:47.

Illegal Curve:  Coach Maurice pre-game.  On the players mindset with respect to reactions to a win or a loss.  Status of Matt Hendricks.  Status of Byfuglien.  What has he seen from the Canucks?  More on the Byfuglien fishing trip.  Play of Tucker Poolman.  Simplicity to Poolman’s game.  Getting shots through.  On Poolman’s progression from where he was six years ago.  Do players like Poolman appreciate it more when they get to the NHL?  On Petan’s play.  On his relationship with Canucks coach Travis Green.  On returning with Hellebuyck tonight.  Trying to line match.