Toronto Star:  Jets concerned about double standard in Trouba suspension.  Hard to disagree when the Malkin hit doesn’t even merit a phone call.

Sportsnet:  The top 5 goals of Patrik Laine’s rookie season.  Chris takes a look back and picks his top five out of the 28 that Laine has scored this season.

Toronto Sun:  Laine-Matthews not exactly same as Ovechkin-Crosby.  Mathieu Perreault had a first hand look at this battle and as I’ve been saying last couple of days is I’m not upset this circus only happens a couple of times a year.

Winnipeg Sun:  Laine, Matthews play down rivalry as Jets meet Leafs in Toronto.  Really cannot be too surprised that both these young players aren’t being baited into saying some juicy about their opponent.  Ted sets up tonight’s contest for you. 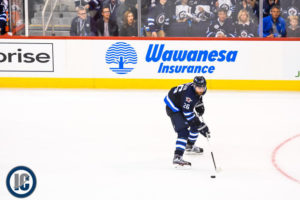 TSN:  Mark Scheifele on always pushing for more.  (Video).  Does Mark Scheifele feel underappreciated in the shadow of what Patrik Laine is doing? What has been to key to success this year for Scheifele and how he feels about the high praise Mike Babcock is paying towards him in the media? Gino Reda chats with the Jets forward to find out.

TSN:  Babcock on how “special” Laine vs. Matthews showdown is.  (Video).  Maple Leafs head coach Mike Babcock talks about how special it is to see star rookies Patrik Laine and Auston Matthews compete against each other, updates Mitch Marner’s status, and more.

ESPN:  Blake Wheeler points to lack of consistency after no Evgeni Malkin suspension.  Hard to disagree with the Jets captain on this point.

Illegal Curve:  Jets vs. Leafs pre-game report.  Take a look at what the Winnipeg and Toronto projected lines, D pairs and starting goalies will be for tonight’s game at the MTS Centre.  Audio from Blake Wheeler, Mark Scheifele, Josh Morrissey and Patrik Laine.

Illegal Curve:  Coach Maurice pre-game scrum. Topics included: On Scheifele. On how Laine is handling the media exposure of the hype of this game? What does it mean for the NHL to have two teenagers on the cusp of 30 goals? Did Manitoba accept his apology? What is the level of difficulty coaching without Trouba? Assessing the rookie class of the NHL this year. On how kids this young are shooting this well. On Byfuglien becoming a defenceman whisperer? An update on Stafford? Any comment on the Trouba suspension? Does the Malkin hit factor into his disappointment? On Melchiori.

TSN:  Who are the best players not skating in the NHL?  Craig may want to update his list as Jack Roslovic should probably be higher up on this list in my opinion.  Kyle Connor and Logan Stanley are also listed.

Game 63: Jets vs. Leafs pre-game report
What will the Jets do before the NHL Trade Deadline?