Winnipeg Free Press:  Jets have holes to fill before they dig themselves a big one.  (Paywall).  As I’ve written previously this first month of the season will be critical for this young Jets team.

Winnipeg Free Press:  The kids have taken over.  (Paywall).  (Video).  Free Press editor Steve Lyons and columnist Paul Wiecek talk about the NHL’s youth movement, which is also seen in the Jets line-up for their opening night match-up.

Winnipeg Sun:  Hellebuyck gets the nod.  Ken gets you set up for tonight’s game including the selection of Connor as tonight’s starter as well as a number of other topics. 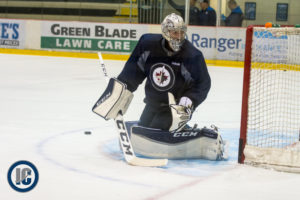 Winnipeg Free Press:  Hellebuyck gets the call for the Jets to open season.  (Paywall).  Mike previews the contest between the Jets and Hurricanes.

Kenora Daily Miner and News:  Jets will honour their most passionate fan before home opener.  Will seem odd listening to the national anthem and not seeing Kroppy in his customary spot, belting out the anthem with gusto.

Illegal Curve:  Jets vs. Hurricanes projected lineups.  Take a look at what the lines looked like after skate today and what combos you should expect to see at MTS Centre this evening.  Audio: Patrik Laine, Kyle Connor, Mathieu Perreault, Mark Scheifele and Blake Wheeler.

Illegal Curve:  Coach Maurice pre-game scrum.   On the high scoring games from last night.  On success being connected to age.  What does he like about what Bill Peters does as a coach?  Why Connor Hellebuyck for game 1?  How did he get to his starting lineup?  Expectations on Patrik Laine’s debut?  How difficult is the role they are asking Josh Morrissey to play? On having a Finnish player like Laine in the lineup (presumably asked by Finnish media).  Do younger players put more expectations on themselves to succeed quicker?

News and Observer:  Hurricanes hand out four A’s, no C.  A look at what is happening over on the other side of the arena.