Winnipeg Free Press:  Enstrom having knee surgery.  (Paywall).  Ed was down at the MTS Centre and files this pre-game report. 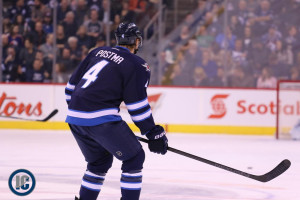 The Province:  Winnipeg, the NHL’s smallest market, has its challenges.  Just some talk about the Byfuglien and Ladd contract situations and how they impact Winnipeg.

Illegal Curve:  Tobias Enstrom to have surgery Thursday; out indefinitely.  Interesting to hear that Enstrom has been dealing with this issue since November but only now with a press of games and not enough time for recovery will he have the procedure performed.  Full quotes from Maurice in the post.

Illegal Curve:  Jets vs. Canucks projected lineups.  Take a look at what the lines looked like after skate today and what combos you should expect to see at the MTS Centre this evening.  Audio includes Blake Wheeler, Drew Stafford and Nic Petan.

Winnipeg Free Press:  Does it make sense to give Scheifele big dollars? (Paywall).  In this episode of “White Noise” sports editor Steve Lyons and reporter Paul Wiecek are at the MTS Centre talking Mark Scheifele and his future with the Jets.  (Jets talks starts at 8:55 mark).

Illegal Curve:  Coach Maurice pre-game scrum.  Topics include – Will Nic Petan play with Scheifele and Wheeler? What type of growth has he seen in Petan’s game?  On the different line combo he has used this season.  How has it helped him to evaluate what he has?  Status of Enstrom?  How does he frame these last three weeks?

TSN 1290 Winnipeg:  The Big Show.  TSN’s Ray Ferraro stopped by for some NHL talk including open ice hitting in the league, two moves the Canadiens need to make in the summer and why players on cellar dwelling teams couldn’t care less about chasing a top draft pick.