Note:   After the game, be sure to check us out for all the post-game reaction. As soon as illegalcurve.com is updated we notify you via Twitter | Facebook | Instagram.

Winnipeg Sun:  Lowry pushing forward for Jets.  It hasn’t been a banner year for the young forward but it seems to have turned around since he was sent to the Moose for some seasoning.

Winnipeg Sun:  Byfuglien a game time decision tonight for Jets against Canucks.  Ken is in Vancouver and sets up tonight’s late game from Rogers Arena.

Globalnews.ca:  ‘Kroppy’ hoping to make Winnipeg Jets home game by end of month.  This is good news as there was plenty of speculation that the fan favourite might not be at another home game this season.  While the veteran didn’t make it to the military appreciation game this season fans would still like to give him a cheer during the anthem if the opportunity presents itself. 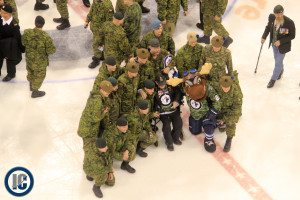 Globalnews.ca:  Jets recall Melchiori again.  His last NHL game (which was also his first) was way back on December 27th, 2013 and whether he plays the second one of his career will be a game time decision.

Winnipeg Free Press:  Alumni field gala event has huge Jets appeal.  (Paywall).  Dale Hawerchuk and Mark Scheifele are both lending their support to help out this cause.

Illegal Curve:  Kyle Connor earns five post-season Big Ten Conference distinctions.  Is there anything the Jets 2015 1st round pick can’t do?  Getting closer and closer to putting his name on the Hobey Baker trophy.

Illegal Curve:  Jets vs. Canucks projected lineups.  Take a look at what the lines looked like after skate today and what combos you should expect to see at the Rogers Arena this evening.

Illegal Curve:  Coach Maurice pre-game scrum.  Update on Byfuglien.  If Byfuglien cannot play how does he work his D pairs?  Flu related for 33?  Having young prospects in the lineup.  Anxious for getting youth in the lineup to have them ready for next season?  On the Jets goalie situation.  How has Lowry handled himself since his recall from the Moose?  Is his game still growing? Having a guy of his size in the central division?  What has he liked about JC Lipon at the pro level?