Note:  Make sure to @ tweet @illegalcurve with your guess during tonight’s game you can win IC Gear by participating in our twitter Game Winning Goal and 50/50 contests. Remember that for your vote to qualify you must send in your guess by hashtaging (#) our Game Winning Goal (GWG) contest and 50/50. (i.e. #ICGWG Thorburn and #IC5050 $41,250). 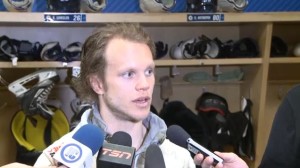 Winnipeg Sun:  Enstrom to play against Lightning.  With the news that Ron Hainsey and Mark Stuart would be unavailable tonight, this comes as welcome relief to Jets fans worried about the team’s depth on D.

Illegal Curve:  Coach Noel pre-game scrum.  Comments on firing of coach Boucher.  What was it like when he took over for coach Hitchcock?  Difficult part of coming in when someone has been released.  Did he get a sense players are more energized?  Is there a malaise hitting teams this season?  Managing the players energy (thinking for game vs. playoffs).  Injury updates (Wright – on IR, Stuart – will not be in game, Hainsey – not in game, Enstrom – off IR and in tonight, Peluso – week to week, Slater – week to week, Mario Lemieux – oh we don’t have him).  Optional practice.  Keys to managing injuries.

Illegal Curve:  Jets vs. Lightning game day preview.  Ez provides a look at tonight’s match-up after all the lineup changes were announced.

Illegal Curve:  Winnipeg Jets Morning Papers.  If you missed any of today’s morning news, we have you covered.