Winnipeg Free Press:  Lucky 13th start for Hellebuyck as Jets face Stars.  (Paywall).  Hard to tell that this kid is a rookie considering the way he’s played since he was called up and thrust into the starter’s role. 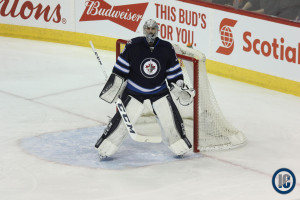 Winnipeg Sun:  Jets shooting for the Stars.  The Jets are looking way, way up when they see the Stars place in the standings and they will be in tough tonight against a very talented Dallas team.

CBC:  Jets’ fans prep track suits for Evander Kane’s return.  Have I really become that much of a killjoy that I think this is all kinda lame?

Buffalo News: Kane’s Winnipeg return likely to be cold as ice.  Folks in Buffalo are also ramping up coverage of what is easily one of the most anticipated games on the calendar for either team.

Metro News:  Jets’ playoff hopes on life support.  Hustler writes about the Jets playoff hopes, the All-Star snubs and the return of Kane/Bogosian.

Illegal Curve:  Nikolaj Ehlers fined $2,000 for diving/embellishment.  After receiving a warning in a game against the Coyotes he was finally penalized (not on the play but after the fact by the NHL) in the pocketbook.

Illegal Curve:  Jets vs. Stars projected lineups.  Take a look at what the lines looked like after skate today and what combos you should expect to see at the American Airlines Center this evening.

Illegal Curve:  Coach Maurice pre-game scrum.   The effect of winning on the road.  What does he see with Ben Chiarot’s game?  On the offensive fire power of the Stars.  What has he liked and what would he like to see improve now that he’s reached half way point of season?  Describing the transition to the pro game for Andrew Copp.

TSN 1290 Winnipeg:  The Big Show.  Voice of the Jets, Dennis Beyak joined the Big Show to break down the club’s matchup against the Stars as well as the slow starts Winnipeg has gotten off to and why the schedule in January sets up for a potentially juicy month for the Jets.

TSN 1290 Winnipeg:  The Big Show.  TSN’s resident scout Craig Button joined the show for some hockey talk including how Nashville was the clear winner in the Ryan Johansen/Seth Jones swap, LA’s acquisition of Vincent Lecavalier and Luke Schenn plus why Jets GM Kevin Cheveldayoff doesn’t have to move his two big pending UFA’s if the trade market isn’t strong.