Winnipeg Free Press:  Jets promise discipline, accountability ahead of tonight’s game in San Jose.  (Paywall).  Plenty of promises of turning the other cheek when it comes to reprisals.  Will be interesting if Jets can stay true to their pre-game word. 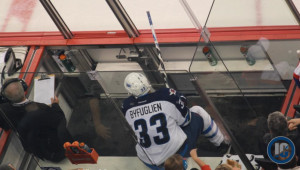 Winnipeg Sun:  Fixing focus.  The team seems pleased with their play other than that which has been sending them to the sin bin.  Feel if they can control that aspect of the game then they should be coming away from these games with two points more often than not.

Illegal Curve:  Jets vs. Sharks projected lineups.  Take a look at what the lines looked like after skate today and what combos you should expect to see at the SAP Center this evening.

Illegal Curve:  Coach Maurice pre-game scrum.  Approaching the issue of discipline with his team.  What stands out from Arizona that they can build upon? Is the focus about mental toughness?  On the struggle of the power play.  Is the lack of success on a power play causing problems once it ends?  Conversations between coaches.  Did he see a natural coach in Peter DeBoer?  What did he learn from DeBoer?  What is the latest on Mark Scheifele?  Comparing Burns and Byfuglien.  Using Byfuglien on the PK.  Did he need to talk to Ladd about that penalty at the end of the 2nd period?

San Jose Mercury News:  Burns finding the net at record pace.  San Jose has their own forward turned defenceman who is quite exciting to watch.