ESPN:  Grading the West after one third of the season.  (Paywall).  Starts off with Jets talk.  Then its behind the paywall where the Jets talk continues.

Winnipeg Free Press:  Jets coach insists contract talks not a distraction for team.  (Paywall).  There may be a bump in chatter when a story comes out like Tim Campbell’s did yesterday but it doesn’t really continue past a 24-48 hour life cycle. 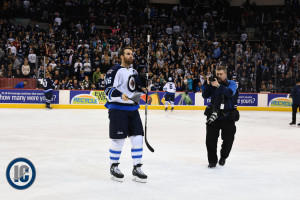 Winnipeg Sun:  Jets try to keep Ladd, Byfuglien talks at bay.  Paul brings in the players perspective from inside the room.

CBC:  5 things to watch as Jets look to extend home win streak against Blues.  Including 1) Division record 2) Trouba 3) Tarasenko 4) Had to happen to Hellebuyck and 5) Chris Thorburn.

NCAA: NCAA Stars of the Week.  Jets Kyle Connor had two strong games for Michigan this past weekend after being snubbed by Team USA.

Sportsnet:  30 Thoughts – Why the Jets face painful personnel choices.  Starts with Jets and then goes player by play in points 1, 2 and 3.

Illegal Curve:  Jets vs. Blues projected lineups.  Take a look at what the lines looked like after skate today and what combos you should expect to see at the MTS Centre this evening.

Illegal Curve:  Coach Maurice pre-game scrum.   Game plan for a player like Vladimir Tarasenko.  Ladd/Byfuglien – how important a part are they of the leadership group are they and at what point do their uncertain futures become a concern for him as a head coach?  Does anything stick out about Alexander Steen?  Can he be compared to anyone?  How is he going to fix the power play?

TSN 1290 Winnipeg:  The Big Show.  Colour analyst Shane Hnidy joined the show to preview the tilt and touch on Thorburn’s impact inside the Jets locker room.