Note:  With the kicking off of the NHL season tonight we also re-start NHL Mid Week except we have changed the name to NHL This Week with Illegal Curve.  Regardless of the name you can tune in for two hours of NHL hockey talk on TSN 1290 Winnipeg from 6 pm until 8 pm.  Guests:  Shane Hnidy (TSN 1290 Winnipeg), Jack Edwards (Bruins play-by-play voice on NESN) and Ken Daneyko (Devils broadcast analyst on MSG plus).

Winnipeg Free Press:  Captain Ladd upbeat about rookies.  (Paywall).  The injection of the youth movement is turning the Jets captain into an oldtimer at the ripe old age of 29.

Winnipeg Sun:  Captain Andrew Ladd not sure if he’ll shut down contract talks.  It was pretty clear to us in the Jets room this morning that the captain isn’t wanting to spend anytime this season chatting publicly about his contract status. 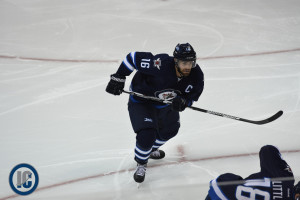 Sportsnet: Why Dustin Byfuglien is the 34th most important NHL player.  A look at what makes big #33 so important to this team.

Illegal Curve:  Projecting the Jets forward lines and D pairs.  With 23 guys now on the roster we take a look at the lines you can expect coach Maurice to start the season with.

Illegal Curve:  Coach Maurice scrum.  Opportunity of playing first four on road and chance to bring team together.  What sort of words will he have for his rookies before they play their first game?  What are the adjustments that the young players need to make to have success long term?  Do the veterans need to “pick up the slack” to shield the rookies?  On the team playing defence as a five man unit?  Does Ladd’s contract status handicap him as a coach?  What role does he see for Raffl in the organization?