Note: Make sure to @ tweet @illegalcurve with your guess during tonight’s game you can win IC Gear by participating in our twitter Game Winning Goal and 50/50 contests. Remember that for your vote to qualify you must send in your guess by hashtaging (#) our Game Winning Goal (GWG) contest and 50/50. (i.e. #ICGWG Wright and #IC5050 $40,950).

Winnipeg Free Press:  ‘We’ll have to come out strong and ready to play’ says Byfuglien.  The Jets are going to need Big Buff to be at his best the next two nights.

TSN:  Winnipeg looks to keep hold of first place with back-to-back Caps.  The Jets record at the MTS Centre this season is a disappointing 7-6-0, so the barn isn’t the fearsome place it was last season.  Time for fans to show why this was such a tough place to play and part of the reason the Jets finished with a 23-13-5 record on home ice.  Munz gives you a look at both team’s expected lines.

CBC:  Winnipeg police lay charges in ticket scam.  Good for the police for catching this guy. 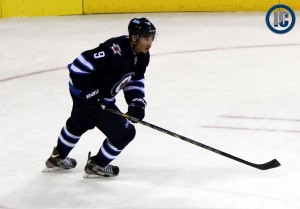 Winnipeg Free Press:  Enstrom not dressing for Jets tonight.  You know that coach Noel is just itching to get the offensively talented Enstrom back into this lineup, especially to help quarterback the Jets anemic power play.  At same time this team is winning and he won’t want to risk re-injury by rushing Tobias back into lineup too quickly.

Winnipeg Sun:  Jets look to avenge shut out in back-to-back with Capitals.  Whatever motivation this team needs to create to beat the Capitals they should use as tonight’s win is of critical importance in solidifying a playoff position.

Illegal Curve:  Coach Noel pre-game scrum.  Players taking Maintenance days.  Enstrom coming soon.  What has Blake Wheeler meant to this team?  Playing with coach Noel’s system.  Potential to be a 30 goal scorer?  Has Ladd’s production surprised him?  More on Ladd.  Frustrating the opponents?  Talk about Mike Green.  What does he see from Olli Jokinen?  His thoughts on smaller goalie equipment/coach’s challenge.

Puck Buddys:  Coming out 2.0.  A new Jets site is starting up and writer Remi introduces himself under the Puck Buddys banner.

Illegal Curve:  Winnipeg Jets Morning Papers.  If you missed any of today’s news, we have you covered.

Monumental Network:  Coach Oates pre-game (video).  If you want to hear from Capital coach Adam Oates prior to tonight’s important game against the Jets here he is.