Winnipeg Free Press:  Jets endeavour to stay out of penalty box against Capitals.  Can the Jets knock off a tough Eastern Conference opponent in their quest for a postseason spot?  Ed writes that if they do they may want to stay off the penalty kill. 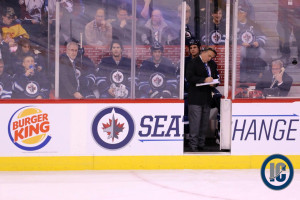 Winnipeg Sun:  Jets in the danger zone with Ovechkin and the Capitals in town.  There is something about playing against the Washington Capitals late in March that is somewhat disconcerting for Jets fans.

CBC:  5 Things to Watch.  Jeff previews the game and brings you these five topics to consider, including: 1)  Capital punishment 2) Staying disciplined 3) ‘The Great 8’ 4) Riding the hot hand and 5) In the other crease.

Illegal Curve:  Jets vs. Capitals projected lineups.  Take a look at what the lines looked like after practice today and what combos you should expect to see at the MTS Centre this evening.

Illegal Curve:  Coach Maurice pre-game scrum.  Is it tougher to play the Jets game against a team like the Capitals?  How close is his game to where he wants it at this point in the year?  Maintenance morning for Ladd?  Byfuglien/Little status?  On his match ups.  What has been Barry Trotz been able to do with his team in less than a year?  How much does the PK have to change against Ovechkin?  Trying to eliminate Ovechkin.

Part 1:  0:00 – Jets defeat Blues.  13:36 – Jets/Capitals Preview. 27:44 – $5.0 million dollars to spend, one player can receive it. Drew Stafford or Michael Frolik?  40:02 – What impact will Johnny Boychuk’s contract extension have on Dustin Byfuglien’s next contract?  50:47 – The Winnipeg Jets lines when all players are healthy.  1:03:26 – Burning questions for Western Conference Playoffs Contenders.