Winnipeg Free Press:  Jets will have their hands full against Blues tonight.  No question about it as they go up against one of the top team’s in the Western Conference.  The Blues are a well oiled machine and the Jets are focused on securing two critical points tonight.

Winnipeg Sun:  Can Jets break the Blues’ spell?  They have a lot of tough opponents left so you cannot simply prey on the weak and hope to make it.  You are gonna have to be able to punch the big guys right in the mouth (not literally or maybe literally) as they try and pull out two big points.

Metro News:  Get ready for exciting playoff hockey, Winnipeg Jets fans.  You may have paid for the seat but Hustler says you will only need the edge as we watch the Jets sprint for their first post season in the city. 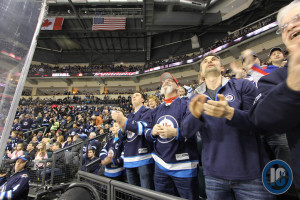 Illegal Curve:  Jets vs. Blues projected lineups.  Take a look at what the lines looked like after practice today and what combos you should expect to see at the MTS Centre this evening.

Illegal Curve:  Coach Maurice pre-game scrum.  Ladd’s status.  Byfuglien’s status.  Focus on tonight’s game or importance of win against a team you could face in playoffs?  Prognosis with Byfuglien?  What does he see in the play of Mark Scheifele?  On the combination of Wheeler and Scheifele.  On Wheeler’s reaction to being moved to 2nd line.  Working on Wheeler’s defensive side of his game.  How close is Wheeler to being at the top of his game?  What does he like best about the stretch playoff run?  Are there things he handles better during stretch run at this point in his career?  Keys to playing against the Blues.  Is this the team you need a 60 minute effort against?  Does he the similarities between the two teams?  What will it take to get to the same level as the Blues?  Was there any debate about going back to Pavelec?  Has he seen anything different in Pavelec’s game?  Does he see that confidence in Pavelec?