Winnipeg Free Press:  Jets hoping to extend their season-best winning streak against depleted Pens.  You never want to look past an opponent but if there was ever a time to hammer a Penguins team tonight is the night.  Of course the Jets were in a similar situation and many teams learned it was an error to judge a team that is dealing with injuries.  Perhaps we shall see Byfuglien vs. Downie Part Deux? 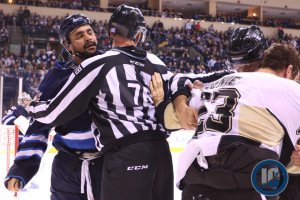 Illegal Curve:  Coach Maurice pre-game scrum (audio).   Update on Perreault/Stuart.  Intense game with Pittsburgh last time, can they get back to that?  Mentality of putting Thorburn with Lowry and Kane.  On his relationship with Pens GM Jim Rutherford.  When he looks at Penguins, does he see similarities systematically to what the Jets have done?  What is the challenge of this team minus Crosby/Malkin?  On goalie rotation.

Illegal Curve:  Mark Stuart place on IR.  The Jets made some room for Mathieu Perreault today which unfortunately for them came at the expense of Mark Stuart continuing to be bothered by his lower body injury.

Illegal Curve:  Jets vs. Penguins projected lineups.  Take a look at what the lines looked like after practice today and what combos you should expect to see at Consol Energy Center this evening.

TSN 1290 Winnipeg:  The Big Show (audio).  Shane Hnidy joins The Big Show to discuss how this move could benefit the Jets short term and why, as a former NHL d-man, he would be hesitant to go into the corners with the trio on the ice.

Pittsburgh Post-Gazette:  Maurice still grateful to mentor Rutherford.  Discussion with the Jets bench boss on his relationship with the Penguins GM.

Pittsburgh Tribune-Review:  Crosby understands rule prohibiting him from playing, stresses he is hurt.  Sounds like he wouldn’t have been able to play tonight based on his health.