Winnipeg Sun:  TJ Galiardi looking forward to opportunity.  From the sounds of it he sure seems ready to accept the challenge put forth by coach Maurice. 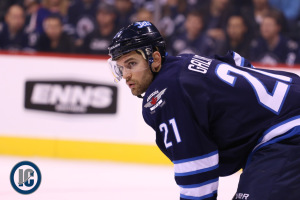 Winnipeg Free Press:  NHL expects to announce outdoor games in next couple of months.  Based on a conversation between Gary and Mark Chipman last year, the suggestion is that Winnipeg is likely to host a game next season.  If that is the case, who would you like to see the Jets face?

The Hockey Writers:  Interview With Jets Prospect Pavel Kraskovsky.  Not much Jets content in the article but an opportunity to learn more about the Jets Round 6 selection 164th overall in 2014.

Illegal Curve:  Coach Maurice pre-game scrum (audio).  Thoughts on moving forward without Evander. Getting Slater/Galiardi out on the PK. Is there something he wasn’t seeing from TJ 5 on 5? On getting no shots in ten games, what more can he (that line) do. What’s impressed him most about Chiarot’s game? Does he change game to adjust for Stars struggles? What has he seen from Seguin this season? How big a setback is it for the team to lose Kane for two games? Is he surprised/disappointed about the suspension?

Illegal Curve:  Jets vs. Stars projected lineups.  Take a look at what the lines looked like after practice today and what combos you should expect to see at American Airlines Center this evening.

Dallas Morning News:  Lindy Ruff reducing John Klingberg’s minutes to avoid going ‘backwards’.   The younger brother of Jets prospect Carl Klingberg, John has been playing really well since being called up from the Stars AHL affiliate.  However coach Ruff is recognizing that team’s will start to develop a strategy and he is trying to ensure that he doesn’t hurt the development of the Dallas prospect.