Winnipeg Free Press:  Jets ‘excited’ to face Penguins.  Whenever you find yourself against one of the best team’s in the league you cannot help but use it as a measuring stick.  While coach Maurice said win or lose it won’t define what this team is doing long term, fans would sure like to see another improbable win added to the current streak.

Winnipeg Sun:  Jets set to face high powered Penguins.  Ken provides you with insight on the Jets and Penguins and specifically the importance of discipline.

CBC:  5 Things to watch.  Jeff takes a gander at tonight’s game and gives you these five things to ponder, including: 1) Kane searching for his first 2) Crease curse 3) Red-hot Penguins 4) The fury of Fleury and 5) Mr. 500.

NHL.com:  At the Rink.  Patrick gives you his report from the rink. 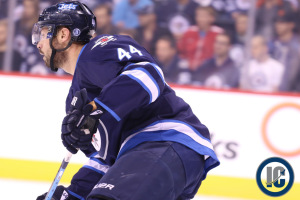 USA Today:  NHL one month in – 10 things we didn’t see coming.  Number 5 mentions the Jets pushing for central division lead.  Kevin Allen doesn’t give himself enough credit as he was one of the few pundits who prognosticated the Jets potential to challenge for 3rd in central.

Sportsnet:  30 Thoughts.  Jets are mentioned in thought 8 (trade chatter), 9 (defensive effort in win in Chicago) and 30 (playoffs which is good news for Jets fans).

Illegal Curve:  Coach Maurice pre-game scrum (audio). Can he share the easy formula for beating the Penguins?  How does he make sure the team stays in “their game”?  Striking balance between aggressive and too aggressive?  Is Dustin Byfuglien ok?  On getting to the Penguins penalty kill.  As a coach does he get excited to have his top rated defence against a top rated offence?  Does he notice a change systematically/structurally of the Penguins since Coach Johnston took over.

Illegal Curve:  Jets vs. Penguins projected lineups.  Take a look at what the lines looked like after practice today and what combos you should expect to see at MTS Centre this evening.

USA Today:  The Penguins are scary good (and they could get even better).  Usually we don’t like to induce nightmares in our readers but this is one scary bunch of Penguins.

ESPN:  Why the Penguins signed Fleury deal now.  Requires you to be an insider but looks at the deal from the Pittsburgh perspective.