After some summer speculation the new reverse retro jersey has been revealed.

Back in August the folks at Icethetics, who have an amazing handle on all things jerseys, did a summer preview which provided their thoughts on the 2022-23 reverse retro jerseys the NHL would be releasing this season.

It has been two years since the last time the Jets reverse retro jersey was revealed.

There were some teases on Wednesday for the reverse retro uniform, although unlike a number of other teams, there was no leak as to what the Winnipeg Jets version would look like.

Today is the day they displayed the full reverse retro uniform which can be seen here:

Close up of the crest: 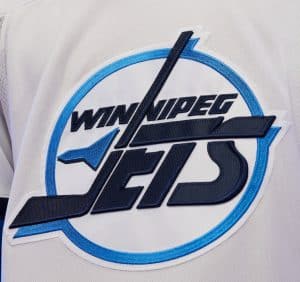 Nice touch by the Jets to have Nikolaj Ehlers sitting in the old seats from Winnipeg Arena while modeling the reverse retro uniform. 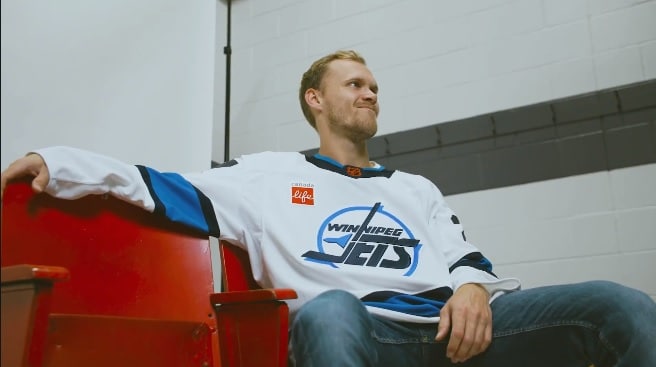 The adidas Reverse Retro 2022 jersey which honours the team’s 1990s era, remixing nostalgic elements of the past and bringing a bold new energy to the Jets’ heritage look. The uniform that inspired the new Reverse Retro look made its debut in 1990 and was worn by Teemu Selanne when he broke the rookie goal-scoring record during the 1992-93 season. This foundational year of 1990 is further represented by being sewn into the jersey’s inside neckline. This 2022 remix represents signature vintage uniform elements that have not yet been represented in previous jersey designs. Featuring the team’s current Aviator blue palette, the jersey features a bright white colour base which pays homage to the storied Winnipeg Whiteout. The “Goals for Kids” patch worn in the 90s is updated to reflect the team’s current support of the True North Youth Foundation.

The reverse retro jersey will be worn seven times this season with three next month including:

Saturday, Nov. 5 vs. the Chicago Blackhawks
Thursday, Nov. 17 vs. the Anaheim Ducks (when Teemu Selanne and Teppo Numminen will be inducted to Winnipeg Jets Hall of Fame)
Monday, Nov. 21 vs. the Carolina Hurricanes (90s night)

What say you?  Let us know on our Instagram here.