Another of the skating wounded returns to the ranks. 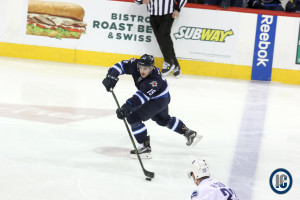 The Jets got some good news today when Nic Petan appeared to be back in the lineup for Winnipeg today at morning skate in Vancouver.  Coach Maurice confirmed that the B.C native would be returning tonight against the Canucks.

Petan has missed ten games with a lower-body injury that he suffered against Nashville back on November 27th.  In 13 games with the Jets this season he has one goal and six assists.

Petan clearly didn’t know whether he was playing or not as he told media following skate that “most of my family and friends are going to find out in the next twenty minutes.”

This leaves just Joel Armia, Shawn Matthias and Tyler Myers on the Jets injured list.  Both forwards were back to practicing today in Vancouver and appear to be close to a return.  The biggest question (literally) surrounds the status of 6′ 8″ defenceman Tyler Myers who hasn’t been seen at a skate in some time. We may get word tomorrow following the Jets practice.