A look at Day 3 of Jets Development Camp. 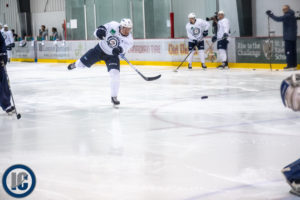 Today the Jets prospects were consolidated into one grouping.  After skate we heard from some players including:

Coach Maurice scrum topics:  His role on the ice.  Is he noticing differences in return players?  Size on the backend.  Thoughts on Jonas Muller.  On the team getting Joe Morrow inked to a one-year deal.  Has the challenge of next season’s expectations started to get into his head?  His impression of Kristian Vesalainen.  Confidence of Vesalainen.  What’s it like for him over the next few days leading up to July 1st?  How does his summer change knowing he has a solid number one goalie heading into next season?  With the playoffs over, has he been able to identify areas of positive growth in his team?  What was his highlight of the past year?

Tomorrow is the final day of Jet Prospect Development Camp and the final session gets underway at 10:30 at the IcePlex.