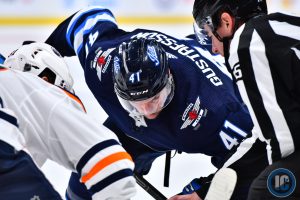 The free David Gustafsson movement will have to close up shop as the Jets 2018 2nd round selection, who hasn’t played in a game since the preseason, will make his NHL regular season debut tonight against the Arizona Coyotes. Although Gustafsson is getting into the starting lineup due to an injury to Mark Letestu it certainly didn’t diminish the excitement level for the highly rated Swedish prospect.

Gustafsson found out today during breakfast and he was asked what making his NHL debut means to him “This is the thing you’ve been dreaming about ever since you were a little kid so it’s gonna be a big night.”

Gustafsson’s family won’t be in attendance but he said they’ll be watching on TV despite the fact that it will be the middle of the night back home in Sweden.

While fans wanted Gustafsson to be inserted earlier in the season he said he learned quite a bit during his time with the team “I’ve learned how to live like an NHL player, notice small details in the game, obviously it’s a lot faster here”.

“He’s got a real smart defensive stick and a real quick pickup in the reads” according to Jets head coach Paul Maurice.

Plenty of eyes will be on Gustafsson tonight but remember he will be wearing number 19 as 41 was what he was wearing during the pre-season but he switched to 19 when the regular season got underway.