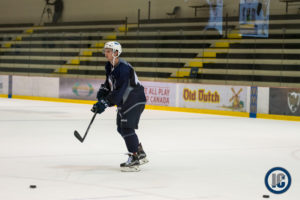 The Jets were being visited by former NHL referee Paul Devorski to work on their penalties troubles.  After announcing this morning that only group 2 (mostly veterans, players you would expect to see on opening night) would be holding an on-ice session, the team also announced that they had re-assigned five players to the Moose from group 1.

The team will head to Edmonton tomorrow with a younger group of players, mostly made up from group 1 and by Sunday you can expect most, if not all, to likely be re-assigned to their junior teams or to the Manitoba Moose of the AHL.

Following skate the players and coach spoke about the session with Paul Devorski.

Coach Maurice:  Status of Little and Armia?  What did he and the team learn from Paul Devorski?  When did he come up with the idea (to bring in Devorski) and what was the impetus behind it?  Did they need the NHL permission to bring in Devorski?  Any memorable stories from his days with Paul Devorski?  Any conversations about Dustin Byfuglien?  Similar lineup tomorrow in Edmonton?  Can we expect cuts on Sunday?  Is he putting any stock in the first three pre-season games?  Starting Monday, things shift into another gear?