The Windsor Spitfires exploded with an early barrage against the Kelowna Rockets in Sunday’s Memorial Cup final, capturing the junior hockey championship with a 4-1 victory. 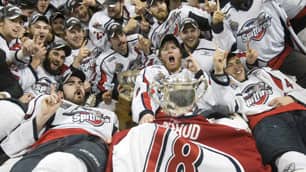 Colin Long scored for the Rockets eight seconds into the second period in the game at Rimouski, Que., but Ryan Ellis of the Spitfires restored the three-goal cushion later in the frame.