Why hasn’t Evander Kane signed yet?

Ezra looks into why Evander Kane has yet to sign with the Jets.

It is hard to believe but it has been over five months since the Winnipeg Jets last played a National Hockey League game. Since April 7th’s home finale between the Jets and Tampa Bay Lightning, the Los Angeles Kings have won their first ever Stanley Cup, Zach Parise and Ryan Suter have signed mega-contracts with the Minnesota Wild and hockey fans across the world have held their collective breaths hoping the 2012’13 NHL Regular Season will start on time.

An event that hasn’t transpired in those five-plus months is a press conference to announce the signing of restricted free agent Evander Kane by the Winnipeg Jets.  Kane, the enigmatic 20-year old from Vancouver, British Columbia, remains unsigned and the status of the contract negotiations between his agent Craig Oster and Jets GM Kevin Cheveldayoff remains a mystery.

Despite numerous rumours suggesting Evander Kane’s unhappiness with the Winnipeg Jets organization and the city of Winnipeg, there Kane was on Monday night, signing autographs at an EB Games store in Winnipeg, an event to promote the release of EA Sports NHL 13 video game.  Although Kane refused to speculate on his contract status when asked by reporters, there was no indication that either Kane’s agent or the Jets organization would be announcing a contract signing this week.

The Winnipeg Free Press reported in mid-July that the Jets offered Kane a 6 year/$29 million contract.  Since that news, Jeff Skinner, Taylor Hall, Jordan Eberle and most recently, Tyler Seguin, have inked long term deals in the neighborhood of $5-6 million dollars per season. 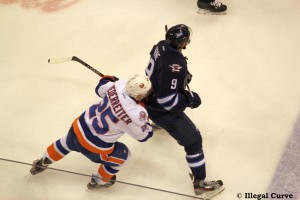 So is it possible that Evander Kane thinks he is worth as much as the four previously mentioned players and is holding out for a slightly better contract?

When you consider that Kane scored 30 goals and 57 points (both career highs) last season on an offensively-starved Winnipeg Jets team, Kane – along with the help of his agent- could easily make an argument that he is an elite young talent in the same league as Hall, Eberle, Skinner and Seguin.

Conversely, Jets GM Kevin Cheveldayoff and the Winnipeg Jets could argue that Kane is a step below that group and doesn’t deserve $5 million plus per year quite yet.  Furthermore, Kane is coming off his entry-level contract  as opposed to Hall, Seguin, Eberle and Skinner who received extensions before their entry level deals expired.  Also, aside from Taylor Hall (who missed 21 games last season), all three of the previously mentioned players- Eberle, Skinner and Seguin- have registered more points than Kane at a younger age (Hall, Eberle, Skinner and Seguin were drafted in 2010, Kane was drafted in 2009). 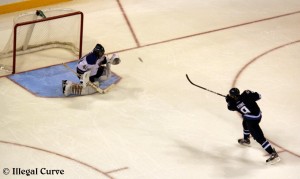 The reality is that Kane’s contract situation is a complicated matter.  As Illegal Curve’s Richard Pollock detailed in his two-part piece “Establishing Evander Kane’s market value”, Kane is a unique player who currently has no leverage.    Compounding matters is that the two forwards drafted before Kane in the 2009 draft, John Tavares of the New York Islanders and Matt Duchene of the Colorado Avalanche, both signed very different contracts over the past two offseasons (Last fall, Tavares signed a six year contract extension worth $33 million dollars while Duchene signed a two year worth $7 million dollars in June of this year).

Now it is quite possible that Kane is looking for a shorter term than Tavares’ six year deal and a longer term than Duchene’s two-year deal- call it a bridge deal if you like for three or four years. The problem with a three or four-year contract is that Chevy would prefer to sign Kane through two of his unrestricted years and is far less interested in having to negotiate a new contract with Kane and his agent four or even three years from now at which point Kane has probably put up the best numbers of his career.  In other words, Chevy’s offer to Kane will be for less money per season if it is for two to four years (most likely in the $3.5-$4.2 million range).

As I write this article today, it feels like Kane is no closer to signing a contract than he was back on July 1st when he became a Restricted Free Agent.  With the current CBA set to expire and a lockout appearing to be a foregone conclusion, I definitely won’t be holding my breath.